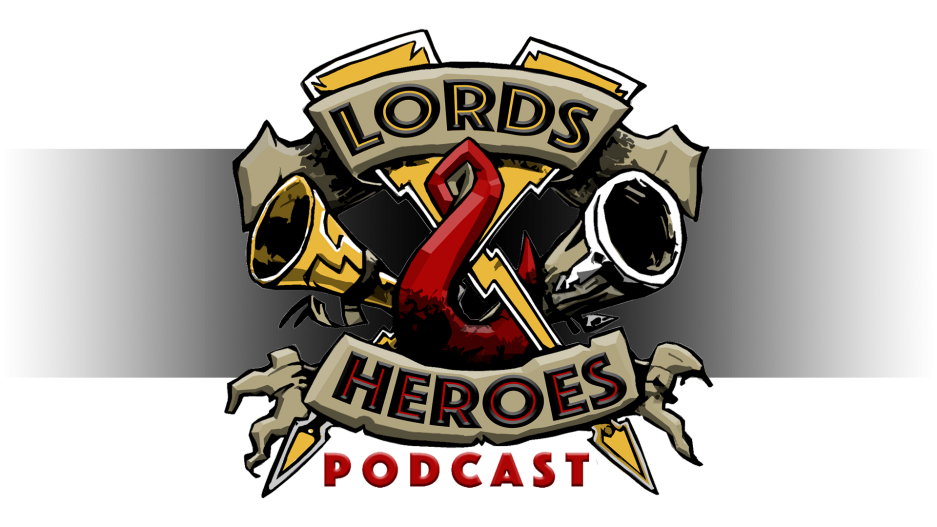 A (mostly) Age of Sigmar Podcast – *On Extended Hiatus*

Lords & Heroes started as a funny idea on a 40K podcast.  Over the years the joke has persisted and the calls for the Lords & Heroes to venture forth increased.  With the fall of the Old World and the eventual rise of the second edition of the Mortal Realms, Justin Keefer and Adan Tejada decided it might be time…
The show is about a gamer’s journey into the Mortal Realms and the detours that happen along the way.  Adan will be eagerly following Justin and others down a thorny path into yet ANOTHER miniatures game.  He may see a shiny dropship or TAG along the way and that might delay him, but Justin is determined to guide him back through the gates of Shadespire and back into the Mortal Realms.
Adan Tejada – A “poly-gamer” with experience from Warhammer to Bolt Action to Infinity and beyond.  His sons moved him from card-flopping (Game of Thrones CCG) to playing with miniatures.  Having started with Heroclix in the 90s, he branched out far and wide on the table-top and into running events.  Adan was the regular Warhammer organizer at Endgame in Oakland, CA and a regular co-host on “The Independent Characters”, a popular 40K podcast along with Justin Keefer.  Justin and Adan will now explore a podcast world beyond the Grimdark.
Justin Keefer – A long time miniature junky and Hobbyist with a love of all things Aelven and Chaotic. Justin has been in the Warhammer hobby for longer than he cares to admit, worked at Games Workshop for a stint, and loves garage gaming as his main outlet.
Other Guests (so far):
Anthony Brown — Co-owner of Zombiesmith Games and former co-owner of Endgame Oakland.  Anthony & Adan have been playing games together for many years and is the regular co-host for Underworlds episodes.
John Feuerhelm — Owner of Firehead Productions and competitive Warhammer 40,000 and Age of Sigmar player.  John’s known in the 40K/AoS scene for his extensive use of L.E.D. lights in his models.  John recorded with Adan about Firehead Productions and the change from 1st to 2nd edition for Age of Sigmar.
Michael Dunsmore — Board game designer and miniatures wargamer. His game “We Need To Talk” was published in 2019 by Smirk & Laughter Games. Michael recorded with Adan to do a deep dive into Blitz Bowl.
Robert Bishop – Phoenix, AZ area gamer and large fan of Age of Sigmar lore, Robert discusses WarCry and the lore of Age of Sigmar on the show.  He also recorded the “deep dive” episode on the Batman Miniatures Game from Knight Games.
Spenser Tejada – Pennsylvania gamer and committed T’au player.  Spenser’s first warhammer model was a chameleon skink from the old Lizardmen range.  He joined Adan to talk about the opening of the Warhammer Cafe.